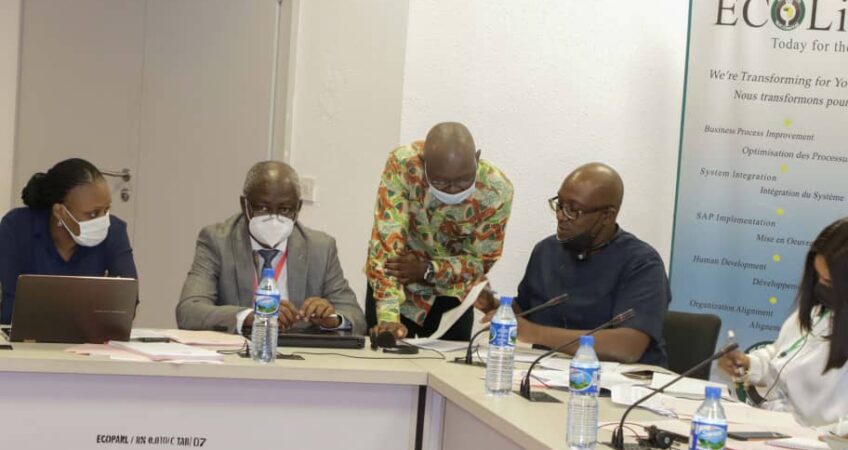 The draft legal texts for the operationalisation of the ECOWAS Regional Competition Authority were presented on Monday 6 December 2021, to the ECOWAS Parliament by a team from ERCA led by the Ag. Executive Director Dr Simeon Koffi and comprising Principal Programme Officer, Legal Affairs, Investigation, Compliance and Application of Law, Dr Yaouza Ouro-Sama.

The presentation was made to the joint Committee of the Parliament comprising members of the Trade, Customs and Free Movement as well as the Legal Affairs and Human Rights, in fulfilment of the provisions of Article 9.1b of Supplementary Act A/SA.1/12/16 of 17 December 2016 on the Enhancement of the powers of the ECOWAS Parliament, which prescribes the compulsory referral to the Parliament when the Treaty or one of its annexes is to be adopted or revised.

During the opening session, the Vice-Chairman of the Joint Committee, Honourable Steven Zargo, after welcoming participants, pointed out that the Committee is made up of two committees of the Parliament, namely the Trade, Customs and Free Movement Committee on the one hand, and the Legal Affairs and Human Rights Committee on the other.  He then went on to ask the Department of Trade, Customs and Free Movement of Persons of the ECOWAS Commission to make the presentations.

Subsequently, the Honourable Members of Parliament asked a number of questions to clarify issues relating to the functioning of ERCA, prior notification of mergers and acquisitions, the definitions and purposes of the draft texts, the delay in setting up ERCA, its powers of sanction, referral and self-referral, etc.

After the necessary clarifications given by the ERCA team, the Joint Committee invited ERCA to start its presentations promptly and gave a favourable opinion for the adoption of the 5 draft texts by the ECOWAS Council of Ministers and the Authority of Heads of State and Government.

It should be recalled that this presentation is sequel to the validation of the draft texts by the meeting of Ministers of Trade of ECOWAS Member States held on 25 November 2021 in Lomé, Togo, and as a prelude to their consideration by the 86th Ordinary Session of the Council of Ministers and the 60th Ordinary Session of the Authority of Heads of State and Government to be held on 9 and 10 December and 12 December 2021 respectively in Abuja, Federal Republic of Nigeria